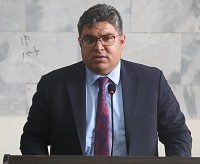 Fahad Daud Momand was born in Nangarhar Province in April 1987. He finished his secondary school and Faculty of Science in Qurtuba College Peshawar, Pakistan in 2005 and graduated as Bachelor of Economics from Peshawar University of Pakistan in 2009. Mr. Momand earned his Masters’ Degree on Political Science from Peshawar University of Pakistan in 2015, beside studying; from 2006 to 2011 he has worked in many fields such as Human Resource, Finance, Customs, Transport, Immigration, Aviation with different entities. From 2013 to 2015 he served as CEO/President of Afghan National Insurance Company and from 2016 to 2020 he served as Director of Afghanistan Stabilization Program (ASP) at Ministry of Urban Development and Housing. He worked as DG of Public Private Partnership (PPP) at AOP on 2020 and after that he appointed as DDG of Investment Facilitation Unit, Administration Office of the President (AOP).

Now, as the Head (Minister) of Afghanistan Civil Aviation Authority, Mr. Momand has set a clear vision and mission for the aviation sector of Afghanistan which envisions sound and healthy development of Afghanistan civil aviation, endeavors for meeting the ICAO and other international standards, and removal of Afghan airlines from the EU ban list.

All material and moral rights reserved for the website of the Civil Aviation Authority of Afghanistan. 2017